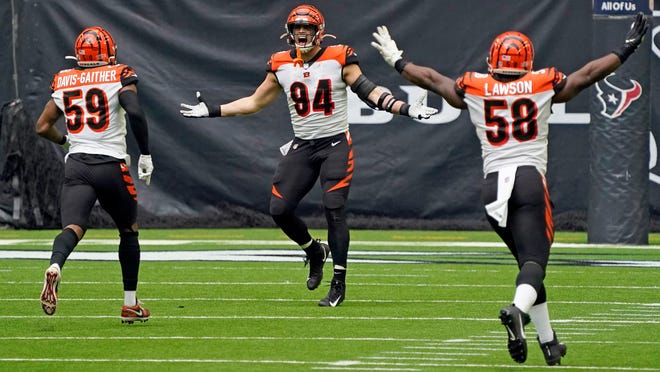 After losing five-straight games, the Cincinnati Bengals now find themselves riding a two-game winning streak. The Bengals defeated the Houston Texans 37-31 Sunday afternoon to earn their fourth victory of the season and first winning streak since 2018.

Furthermore, the Bengals snapped a drought on the road. The Bengals won their first road game since Sept. 30, 2018.

Game story:Allen leads the Cincinnati Bengals to a 37-31 win over the Houston Texans

Brandon Allen led the Bengals in what turned out to be a Texas shootout at NRG Stadium. Allen and the Bengals offense produced a season-high 540 total yards on offense. The fourth-year quarterback had the best game of his career in the win.

“Tremendous," Bengals coach Zac Taylor said. "And that was Brandon (Allen). Brandon was throwing with a ton of anticipation. He was doing a great job seeing the coverages, taking his check-downs when he had to. Really impressed by how he played. Really impressed with the guys around him too."

Here’s what we learned in the Week 16 game:

Brandon Allen returns to QB1 and has best performance of career

Brandon Allen started the game hot. Allen went 5-for-5 passing and led Cincinnati on an eight, play 71-yard touchdown drive on the team’s opening possession. Allen and the Bengals offense moved the ball pretty well in the first half. The Bengals entered Houston territory on their first four possessions, but the offense was only able to score 10 points in the first half.

Cincinnati amassed 229 total yards in the first half. Allen had 188 of those yards passing the football.

The fourth-year quarterback upped the ante in the second half.

The Bengals scored on every second-half possession. Allen led the Bengals on five scoring drives after halftime.

Allen easily had the best game of his career. He finished 29-of-37 passing for a career-high 371 yards and two touchdowns. He also had a career-best 126.5 passer rating.

The quarterback was precise throwing the football and picked apart Houston’s defense. Seven different Bengals caught footballs from Allen in the win.

"He's a confident guy, and he really has the right demeanor you are looking for," Bengals WR Alex Erickson said of Allen. "Everyone just believes in him. He showed that today. The O-line protected him and he was back there picking them apart."

Cincinnati amassed 311 yards total offense in the second half and 27 points.

The Bengals defense allowed 298 yards and three touchdowns on three drives in the second half, but they did make the play of the game which was a strip sack by defensive end Sam Hubbard.

"Defensively we weren’t playing well throughout the game. There was no finger pointing and no negativity. No one was attacking each other. We just kind of stayed the course, kept grinding and brought each other up," Hubbard said. "It was on the defense. One stop and we win the game. That was the message and that’s what we did."

Houston scored on three-straight possessions in the second half before Hubbard's strip sack with under two minutes remaining in the fourth quarter.

Bengals continue momentum on the ground

Bengals running back Samaje Perine kicked off the second half with the longest run of his career. Perine took a handoff, ran in between the tackles and scampered 46 yards down the field for a touchdown. It was the longest run of the Bengals’ season.

The Bengals had their way versus the 31st ranked run defense in the NFL. Cincinnati gashed Houston for 169 total yards on the ground.

"We knew that they were struggling this season and we just had to take advantage of it," Perine said of Houston's run defense. "But it still comes down to us executing our plays. It doesn't matter what they do or how good or bad they are, it's always on us and how we execute. We did a good job executing and the result showed."

Perine led the Bengals with 13 carries for 95 yards and two touchdowns.

Most of Cincinnati’s rushing yards came in between the tackles. The Bengals offensive line had another fine performance.

Cincinnati's rushed for 321 yards in the last two games.

Sample scores first TD: Tight end Drew Sample scored his first career touchdown on the Bengals’ opening possession. C.J. Uzomah, who has been on IR since Sept. 18, was the only Bengals tight end to enter the end zone prior to Week 16.

Tee Higgins ties rookie franchise record: The 2020 second-round pick tied Cris Collinsworth for most receptions ever by a Bengals rookie receiver. Higgins has 67 receptions entering Week 17. He should break the franchise rookie record in the season finale.

Tucker: Extortion from China is the real threat

No bats, no balls, no fans: Pitchers, catchers don’t report

Tucker: Extortion from China is the real threat

No bats, no balls, no fans: Pitchers, catchers don’t report

US gets their medals, gymnasts falter during qualifying, Ledecky on deck for Sunday 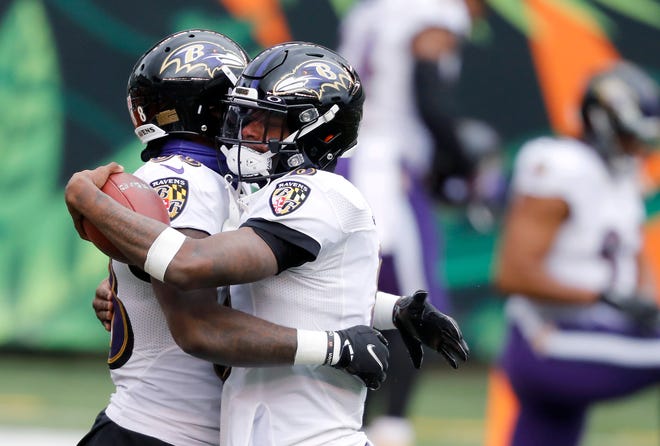 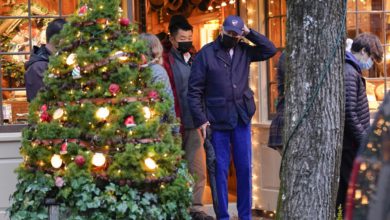