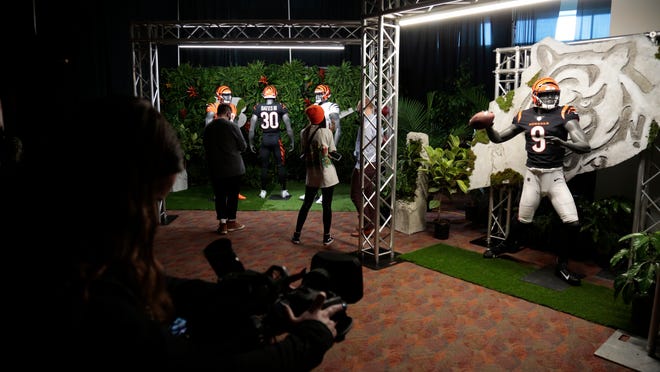 Oh. Sorry. I didn’t know anyone was watching. I was just beside myself with joy. I don’t know about you. But different color combinations involving the color orange just get me giddy. Since the Bengals declared they’d be unveiling new unis, I’ve thought of nothing else. The reveal was set for 9 Monday morning. I assume all four local TV stations covered it live.

A FEW FINAL THOUGHTS ON JAY BRUCE. . . He was part of a dynamic 2010 team with a core capable of doing bigger things than winning the Reds first division title in 15 years. Wouldn’t the 2021 Reds like to have this young core:

After the ’10 team got swept out of the playoffs by the Phillies (fie on you, Roy Halladay) the feeling locally was it was just a test run. Better days were on the way.

Like most things involving small-money baseball teams, that wasn’t the case. The Reds went 79-83 in ’11, blew the NLDS in ’12 and got embarrassed in Pittsburgh in the ’13 wild card game. KWAY-toh, KWAY-toh. . .

And that was it. The comet that was the young Reds fell faster than the 1929 stock market. That either shows how hard it is to sustain excellence in baseball if you’re a Thinwallet, or how poorly the Reds were run in the last decade. Both, likely.

Bruce is a great example of that, too. In the summer of ’16, the Reds traded him to the Mets, for 2B Dilson Herrera and P Max Wotell. Yeah, that max Wotell. The one and only.

Subsequent empty deals (Chapman for nothing, Cueto for close to nothing, mainly) and the promise of 2010 lay in pieces on the ground.

Bruce labored on. He was very good player here, even if we tended to dwell on his shortcomings. Long, loopy swing good for big power and many Ks. Very good arm in rightfield. Sunny personality. He’s just 34, which ought to send shivers and perspective across the bows of any and all major-leaguers now in their 20s. Even long careers are short.

Good on ya, Jay Bruce. Thanks for the memories that didn’t last as long as they should have.

BY THE WAY. . . In the TM, I dumbly declared Bruce’s Central-clinching walk-off HR in ’10 – the happiest moment in Reds history since Todd Benzinger gripped the foul pop in Oakland – to be into the moon deck in RF. It landed in the grass beneath the batter’s eye in CF. I’d rather smash myself in the face with a ballpeen hammer than make a mistake like that.

But I did. Have at me. (Most of you have already. Glad I could make you feel better about yourselves.)Sometimes, I wish I were a weatherman.

YOU THINK UNI-MANIA IS BAD. . . In DC, where no one can do anything without advisors, consultants, polls, committees and filibusters, it figures they’d need a Congressional inquiry of sorts to find a permanent name for the resident football team formerly known as the Redskins. Yahoo!Sports:

Per team president Jason Wright, they are using “focus groups, stakeholder interviews, large-scale surveys, and other qualitative and quantitative approaches to understand what fans want and what types of names resonate with our fans.”

The Washington Team is still a possibility. That one grew on me. I still prefer The Dannys, in honor of owner Daniel Snyder. He already thinks he knows more about running a team than anyone on the planet. He should have his name squarely attached to all that success his team has had since he bought it.

Instead of the Star Spangled Banner, “Danny Boy’’ will be played before all home games. I mean, who’d ever kneel to the playing of Danny Boy?

Hail to the Danny Boys!

The Snyders wouldn’t be bad. It rhymes with Sliders, which is something they do in the standings most years. Also, an edible that gives you heartburn.

MOTHER, MAKE IT STOP. . . The NCAA is tinkering with rules changes for basketball. Lexington Herald-Leader:

Included in the current rules survey are proposals for adding replay review for basket-interference/goaltending calls made by officials and potential shot-clock violations in the final two minutes when a shot is unsuccessful.

Have I ever mentioned how I dislike replay? If replay were edible, it’d be lima beans. If it were drive-able, it’d be my ’79 Chevy Chevette. It’s bad enough that every Madness game somehow crams two minutes of actual action into 20 minutes of fouling, over-coaching and what’s-in-your-wallet commercials. They wanna add more replays to the inertia?

Is their goal to become baseball?

SPEAKING OF. . . Somebody better tell the ball makers that their 2021 ball isn’t exactly staying in the park. Four homers at the Small Park yesterday. Four in the first inning in Atlanta Sunday night, Braves pounding Cubs.

This year’s game looks like last year’s game, which looked like 2019 and so on. Three Outcomes are alive and well and making baseball less entertaining.

WES MILLER IS A BUSY MAN. . . He got Mike Saunders back in Clifton, then Mason Madsen. He was on a reconnaissance trip to the West Coast over the weekend, in hopes of talking Tari Eason into returning.

He offered a tone-perfect presser at his intro Friday. He did a very smart thing in Zoom-ing the former players soon after he arrived. He even tossed a little bravado at Xavier. He signed a very university-friendly 6-year, $8 mil contract.

That’s not to say everything’s peachy. There’s still the matter of John Brannen’s dismissal. I’m thinking there will be an undisclosed monetary settlement, sooner than later. We still don’t know why Brannen was fired. That shouldn’t be white-washed in the gladness currently surrounding the Miller hire.

STICK TO SPORTS. . . And people keep being murdered by people having guns they shouldn’t have. And a 13-year-old was killed by a police officer. Another day, another shooting. If it’s Sunday, this must be Austin.

We will do nothing, because nothing is what we do in this country when people with guns kill people. We have rights.

We should have learned this lesson on Dec. 14, 2012. Sandy Hook. 26 people murdered, 20 of them children between 6 and 7 years old. We did nothing. If we’re not going to at least try to stop the slaughter of little kids, we really don’t care.

Now’s not the time to be talking about gun laws.

If guns are outlawed, only outlaws will have guns.

I LIKE THIS. . . Former NFL exec Mike Lombardi, in The Athletic:

So much time is wasted on stupid arguments that could be resolved if the person in charge would shift the conversation from whom scouts like to how they reached their conclusion. Shedding light on their process will either confirm or deny their evaluations. One of the many reasons for draft failures is that scouts/coaches are too similar in how they approach their evaluations. They all have opinions and thoughts, but unless they can explain their process based on the current pro game, they will make inaccurate predictions instead of quality decisions.

One issue with the smallness of the Bengals personnel department -- and their insular front office -- is a lack of diverse voices. Discussions aren’t always as lively as they need to be. The Bengals have expanded staffing over the recent years. It’s still small.

TRIP REPORT. . . When the weather’s nice, we seek regional roadies and go. Lately, bourbon distilleries have been a favored destination. Beautiful back roads and bourbon tastings. Who could possibly have a problem with that?

This weekend we did something different, a trip to the Zappo’s shoe outlet outside Louisville. It had been highly recommended, but closed because of the virus. It’s newly re-opened and I will say this about that:

I’ve had better luck at Payless.

One aisle of Men’s 9s. Nothing even close to what I might wear, and I’m not picky.

If you’re in Louisville, spend the afternoon at Angel’s Envy. Take the tour, buy a bottle of brown that was aged in port wine barrels. Nice tour, better hooch.

TUNE O’ THE DAY. . . Felix Cavaliere owned one of the better voices in rock. Here’s Felix on lead vocal on my favorite Rascals tune.

How the Cincinnati Bengals created their new uniforms

The Best Destinations To Head To For A Bachelorette Party 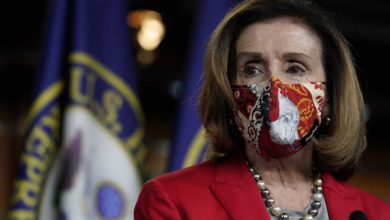 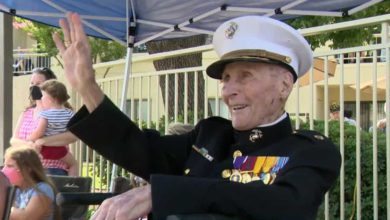 Community celebrates their ‘national treasure’ on his 106th birthday 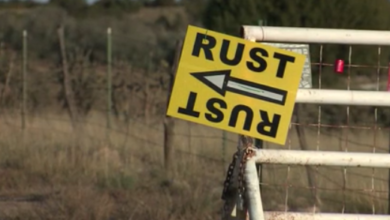 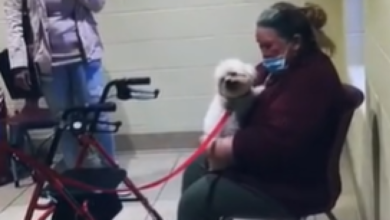 Virginia woman reunited with dog 3 years after he went missing